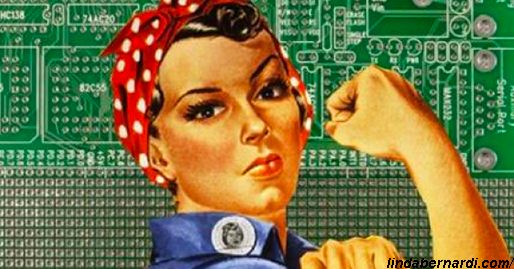 To get more girls into tech careers we need to counteract negative stereotypes about the field, UW and I-LABS research shows.

Women make up only about 20 percent of the recipients of bachelor’s degrees in computer science, creating a large gender disparity. This gap has received ample attention for its causes and what can be done about it.

“Women are missing out on high-paying tech jobs and society is missing out on the valuable input women and other underrepresented minorities could make to computer science and other STEM fields,” said Allison Master, a postdoctoral researcher at the University of Washington’s Institute for Learning & Brain Sciences (I-LABS).

In hopes of attracting more women and other underrepresented minorities to the technology workforce, Master and other UW psychologists have been studying how to dispel and counteract inaccurate computer science stereotypes.

“Across our studies, we find that girls face two types of stereotypes about computer science,” Master said. “First, there’s the stereotype about whether they have enough ability in math and science, and second, about the culture of computer science and what it means to be a computer scientist.”

Master is the lead author of a new study examining whether having a female computer science teacher helps make high school girls more comfortable in computer science. The study will be published in an upcoming issue of the International Review of Social Psychology.

With co-authors Sapna Cheryan, a UW associate professor of psychology, and Andrew Meltzoff, co-director of I-LABS, Master tested hundreds of high school students in the Seattle area. The researchers wanted to see under which circumstances the gender of a computer science teacher mattered for girls.

“Adolescence is key. It’s when kids are developing their identities and are wide open to trying new things,” Meltzoff said. “A lot of studies on women and STEM examine college students or people in the computer science workforce, but the pipeline begins to leak much earlier. Let’s figure out how to draw girls into computer science before they start feeling they don’t belong.”

The researchers designed a study, funded in part by the National Science Foundation, to see whether female teachers and role models could help. Students – about an even mix of boys and girls – read a description of two computer science classes. One class was taught by a man, the other was taught by a woman, and both possible teachers had the same competency and experience in computer science.

Then the researchers created an experimental twist to see how inserting a stereotype into the class description might influence students’ perceptions of the hypothetical class. Some students read a version that included the stereotype that male students perform better than female students in STEM classes. Other versions of the class description did not include this wording. (A debriefing after the survey emphasized to students that there are no gender differences in performance on math and science tests.)

“Female teachers made the most difference when girls were confronted with the stereotype about boys doing better than girls,” Master said. “We found that when stereotype threats are prominent, having a female teacher can help the girls.”

She added: “Our research shows how important it is for students to feel that they belong and that their identities are valued in the classroom. I hope our work helps teachers create optimal classroom environments for girls and other underrepresented minorities who otherwise might not consider a career in STEM.”

In their paper, the UW team also reviewed other research-based approaches for how educators can help diffuse student concerns about gender stereotypes in STEM, including promoting a “growth mindset” in which hard work and dedication are keys to success.

“A growth mindset is beneficial for dealing with negative stereotypes, because it offers room for improvement – that students’ fate isn’t set in stone,” Master said. Another STEM stereotype diffuser is an affirmation intervention, or having students write about their values as a way to help protect them – a strategy that Master used in a previous study with other colleagues.

A related but separate study recently published by Cheryan, Master and Meltzoff revealed other stereotype-defying strategies. Female high school and undergraduate students reported being more interested in pursuing a degree in computer science when exposed to media stories, other people majoring in computer science, and educational environments (including classrooms) that provided a broader image of the field.

The researchers recommend diversifying computer science and engineering fields as a way to make them more inclusive and to counteract stereotypes. That can be done, they say in a university news release, by representing the fields with a broader range of people, creating physical spaces that welcome both men and women, and shifting the media narrative about who computer scientists and engineers are.

“We need more women in computer science,” says Meltzoff. “Pernicious societal stereotypes chase some girls away from the field, even before they’ve given it a chance. We want ways to reach children far before college, while they’re dreaming about the future.”