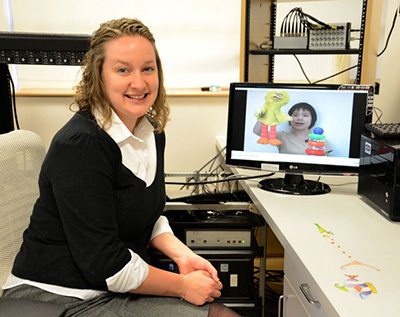 New study has found that children are able to learn more effectively through live interaction and video chat technology.

A new study conducted by the UW, Temple University (TU), and the University of Delaware (UDEL), has found that children are able to learn more effectively through live interaction and video chat technology such as Skype, as opposed to watching a traditional educational video.

Before coming to the Institute for Learning and Brain Sciences at the UW (I-LABS), Sarah Roseberry conducted the study at Temple’s Infant Lab as part of her dissertation study as a graduate student.

The study consisted of 36 toddlers ages 24-30 months, who were exposed to three types of learning conditions: live social interaction, video chat, and traditional video. Twelve toddlers were placed in each of the three learning conditions, and were taught new words for actions such as blicking and frepping. Nonsense words were used to control for children’s prior knowledge of the meaning of actual words.

After being exposed to one of the three learning conditions, toddlers were given a “test” to demonstrate what they learned.