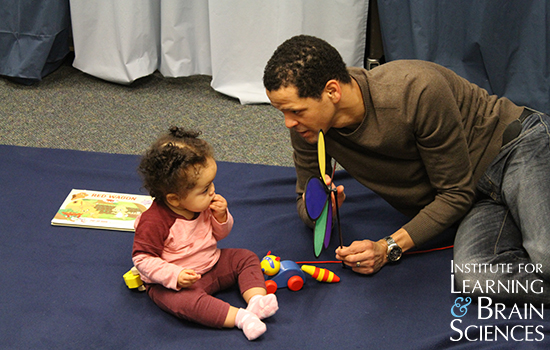 The new findings, published online April 4 in Developmental Science, underscore the importance of early childhood as the optimum time for learning multiple languages.

The study is the first to use magnetoencephalography to compare whole-brain responses to language sounds in monolingual (English) and bilingual (English-Spanish) babies.

Among other results of the new study, the I-LABS team found that the biggest difference between monolingual and bilingual baby brains was that babies from bilingual households had greater activation in brain regions associated with executive function.

The researchers suspect that the need to switch back and forth between languages is what allows bilinguals to routinely practice executive function skills.

“Our results suggest that before they even start talking, babies raised in bilingual households are getting practice at tasks related to executive function,” said lead author Naja Ferjan Ramírez, a research scientist at I-LABS. “This suggests that bilingualism shapes not only language development, but also cognitive development more generally.”

“Monolingual babies show a narrowing in their perception of sounds at about 11 months of age — they no longer discriminate foreign-language sounds they successfully discriminated at 6 months of age,” said co-author Patricia Kuhl, co-director of I-LABS.

“But babies raised listening to two languages seem to stay ‘open’ to the sounds of novel languages longer than their monolingual peers, which is a good and highly adaptive thing for their brains to do,” Kuhl said.

See a video summary of the study:

Other co-authors of the study are Rey Ramírez, Maggie Clarke and Samu Taulu — all researchers at I-LABS. The National Science Foundation UW LIFE Center funded the research.

The lead researcher Ferjan Ramírez speaks multiple languages herself and is raising her children to be trilingual. She says that the number of multilingual children is increasing worldwide, yet little is known about how young children learn more than one language.

“Discovering the similarities and differences between how babies learn one versus multiple languages is important not only from a basic science point of view, but it could also reveal ways to optimize language learning throughout the lifespan,” Ferjan Ramírez said.