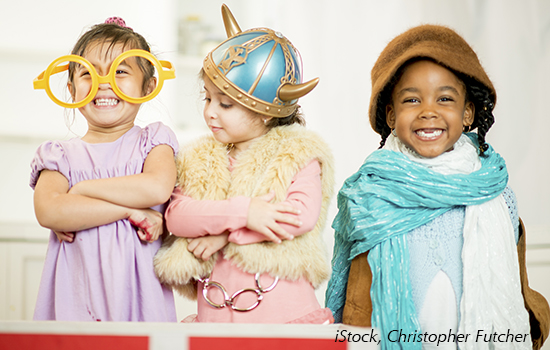 Six reasons why working in I-LABS research is like working in theater, provided by a special guest contributor.

At first blush, you might think that all that young children and theatrical actors have in common is a tendency to be, shall we say, a touch dramatique?

So when I-LABS recently had the pleasure of hosting a student with acting experience, we couldn’t help but ask: what does the research we do at I-LABS have in common with what happens in the theatrical world?

“Simply hearing about I-LABS, you would never associate it with theater, I did not really think about it until I was discussing my interests with some of the people who work here,” said Sophia Sabol, a 14-year-old middle school student who spent time at I-LABS this spring.

As Sabol learned and participated in more I-LABS experiments, she started to make more connections with her knowledge of theater and acting.

“I had a ‘behind the scenes’ experience which showed me much about I-LABS that you cannot find on their website or in any articles written about them and their work,” she said. “Being interested in theater, I got to see how everything going on at I-LABS ties into that.”

In Sabol’s own words, here are the top 6 similarities between I-LABS research and theater:

Most experiments are only possible if the researchers ask and receive a grant to pay for the supplies for an experiment. In this grant, the researchers write a proposal where they explain their idea and tell why it is important. Whoever is supplying the money wants to be pretty sure that the results these researchers get will be worthwhile and useful.

Movies rely on the same thing, the money from their film company. They pitch their idea and hope their company thinks it will bring in more money from the box office.

The babies who take part in the experiments here at I-LABS are analogous to the actors in a play or movie, both are using their bodies and movements to share a message to others. Sometimes babies do unexpected things, such as not following someone’s gaze, not imitating someone, or being too rowdy to do the task.

Actors often make mistakes, the also can change during the story, causing a plot twist. By doing this, babies and actors are keeping the researchers or viewers interested and attentive because they so not know what will happen next.

3. Data Collection is Like Auditioning, But Most Every Data Point Gets a Part

Collecting all of the results from the experiments with babies is somewhat similar to the audition process, in both cases many people are initially doing that same thing. Though instead of simply picking the best actor for the part, the experimenters collect data from all the participants to get a result.

It is not a one-person job to have an experiment, carry it out, and write up a report. In my behind the scenes experience, I saw two different experiments and met the people who all play an important role in these experiments.

One fact that I learned about babies is that first impressions are important with them. For example, if you are angry when you first meet, the baby will think that he/she needs to be cautious when around you.

This is true for characters in stories as well, for a reader or viewer would assume things about the character based on their first impressions like if they were a villain or a hero, and a main or supporting character.

The result of an experiment done at I-LABS showed that babies learn best through live interactions rather than through listening to audio recordings or watching a video. This could be similar to when you are watching a movie, sometimes you may not hear the actor or understand what they are saying, but it would help if you read the script or subtitles.

About the Author:
Sophia Sabol
Sabol is a middle school student in Los Angeles. She has performed in theatrical productions at her school, and plays violin and piano. She also enjoys volleyball, basketball and tennis.

See previous posts:
How Can I Make My Child Exceptionally Smart?
What’s the Big Deal About Screen Media?