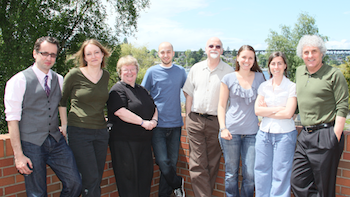 Dr. Meltzoff's Infant and Child Studies Lab conducts interdisciplinary research on developmental science ranging from newborns through elementary-school children and teenagers. His lab chiefly explores how children learn from and about people – the development of social cognition. One central line of work in the lab investigates powerful social learning mechanisms, such as imitative learning and joint attention. This has led to an expanding range of collaborative studies on (i) the development of theory of mind, (ii) how sociocultural factors influence the expression of altruistic behavior in human infants, (iii) cognitive neuroscience studies (MEG/EEG) on infant neural body maps and fMRI work on human empathy, and (iv) experiments using social robots with children to test theories of social cognition. Meltzoff's lab is also testing theoretical connections between developmental psychology and social psychology. This line of work explores: (i) how cultural stereotypes (e.g., math-gender stereotypes) influence children's implicit and explicit self-concepts, (ii) the formation of in-group favoritism based on gender, race, and randomly assigned (minimal) groups, and (iii) how preschoolers acquire social biases and prejudices based on observational learning of adults. Meltzoff and collaborators have also published key studies on language and thought, atypical development (including work on ASD, Deaf, Down's syndrome), and cross-cultural studies comparing children across cultures to test theory, including East Asian cultures (China, Singapore) and Hispanic cultures (Spain, Chile).

Rodolfo Barragan is a postdoctoral fellow working with Meltzoff. Barragan's research examines the origins and development of altruism in human infants. He obtained his Ph.D. from Stanford University, where he worked with Dr. Carol Dweck. In conducting his research program, Dr. Barragan seeks to develop paradigms to (i) assess infant prosocial and altruistic behavior, (ii) examine shared commonalities and differences between infants and non-human primates, and (iii) identify the sociocultural experiences that enhance the expression of altruism in humans.

Rechele Brooks is a Research Scientist and studies infant joint visual attention. Dr. Brooks' main line of research centers on joint visual attention, including gaze following, joint engagement, and pointing. She examines the development of these important social behaviors in infancy and the attributions infants make about others' perceptions and goals based on these behaviors. She has also published papers on how early social cognition contributes to the understanding of language and theory of mind in children with typical and atypical development, including Deaf children and children with autism spectrum disorder.

Dario Cvencek is a Research Scientist working with Meltzoff to integrate developmental and social psychology. He earned a Ph.D. working with social psychologist, Tony Greenwald. Dr. Cvencek's current research focuses on the development of children's gender stereotypes about math, in-group attitudes, and self-esteem using implicit and explicit measures. He also considers how social-cognitive development in children may be propelled by a tendency of the human mind to keep one's cognitions consistent with one another.

Ashley Drew is a postdoctoral fellow working on the neural representation of the body in infants. She completed her Ph.D. in psychology working with Professor Peter Marshall, an EEG expert at Temple University. Her dissertation focused on interpersonal visual-tactile influences on sensorimotor EEG measures in infants and adults. Drew's current research interests include using both EEG and MEG methods to investigate somatosensory processing in infants and links between the development of somatosensation and early social cognition.

Allison Master is a Research Scientist working with Profs. Andrew Meltzoff and Sapna Cheryan (social psychology). Before coming to the Institute, she earned a Ph.D. in developmental psychology at Stanford University and a bachelor's degree in psychology at Yale University. Her research interests include social-psychological processes that form the foundation of motivation, identity, and achievement from early childhood through adulthood, as well as how cues to personal identity or group membership may affect stereotyping and other social judgments and behaviors. Currently she is investigating how stereotypes affect interest in STEM fields in children ranging from preschool to high school.

Calle Fisher earned her bachelor's degree in psychology at the University of Oregon where she worked on projects with Prof. Mary Rothbart. She has administered a wide range of developmental tests including standardized testing and novel lab protocols.. Her area of expertise is behavioral coding from video-records of infant and child behavior and she has been certified on a number of coding systems including Ekman's FACS and the BabyFACS systems.

Craig Harris has achieved a Master's degree in Education and oversees research on infant development, including studies on imitation, intention, and memory. Harris also has special expertise in statistical analyses having completed workshops and classes in biostatistics with Jim Sackett, and he is a guru on multiple statistical packages.

Dawn Hathaway received her bachelor of arts degree in English and previously worked at the Fred Hutchinson Cancer Research Center. She is an enthusiastic and energetic recruiter and scheduler of research subjects and also performs other lab-related duties with aplomb.

Craig Maddox is a utility player in the lab, bringing his undergraduate training in mathematics, physics, and education to bear as a Research Assistant. Craig is the primary tester of children in a variety of cognitive studies, and is skilled at gathering, recording, and organizing experimental data. Much of this research, including the investigation of math-gender stereotypes, is closely related to his teaching background and personal interests. He works with Dario Cvencek on questions of implicit cognition in young children and is expanding his testing to include children in museum settings and schools..

Grace Mak is a jack of all trades and assists on many aspects of running the lab. She scores infant and child behavior from video-recordings, and also helps to recruit participants into the experiments, checks spreadsheets for accuracy, and is a proof-reader and bibliography checker without equal.

Makeda Mayes is a research assistant working with Meltzoff and Cvencek on the development of stereotypes, identity, and implicit bias in children. She is also doing a special project on the impact of COVID-19 on children's psychological development. She enjoys working with children over Zoom while conducting experiments at a distance in this new research environment.