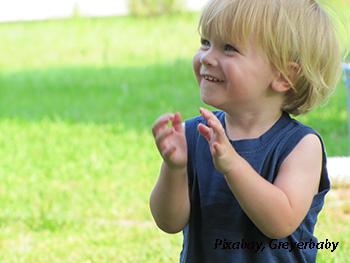 In the first few years of life, children begin to piece together an awareness of the thoughts, feelings and desires of the people around them, gradually building skills to help them succeed in our social world.

While many studies have examined development in toddlers and preschoolers, few have looked at infants to see which early social skills are linked to later social and cognitive abilities.

In a new longitudinal study, Rechele Brooks and Andrew Meltzoff of the Institute for Learning & Brain Sciences (I-LABS) at the University of Washington characterized the development of social behaviors as children grew from infanthood until preschool-age.

The researchers studied gaze-following in infants, vocabulary size in toddlers, and a social-cognitive attribute known as “theory of mind” in preschoolers. The study, which is published in the February 2015 issue of the Journal of Experimental Child Psychology, gives insights into how these behaviors serve as building blocks for social cognition.

“The research suggests that before children learn to talk, they are using strategies other than language to understand the people around them,” said Brooks, an I-LABS research assistant professor. “By linking early signs of social behavior with later skills, we are able to see a trajectory of social and cognitive development.”

“All parents wonder about their baby’s future — ‘my baby is doing great now, but when will she learn to talk?’ or ‘will she be a socially-sensitive preschooler?,'” said Meltzoff, co-director of I-LABS. “We wanted to connect the dots between the babbling baby and the school-ready young child.”

The research, which was funded by the National Science Foundation, could guide the creation of early interventions.

The study began with 10-and-a-half-months-old babies. At that age, infants typically aren’t talking or walking yet, but can sit up and smile, laugh and babble with others. Most of them can also follow someone else’s eye gaze, which is one of the earliest behaviors of social interaction. It’s one of the first steps toward understanding what other people think and feel.

“You make eye contact with the baby, then look to an object and wait for him to look where you’re looking,” Brooks said. “It’s like shining a spotlight on something to show what’s interesting, and it gives a teachable moment so that you can name and explain what you’re looking at to the baby.”

In previous studies, Brooks and Meltzoff have worked out some of the nuances of eye-gaze behavior in infants. Here are some of the highlights:

– Gaze-following boosts language learning. Children who showed more gaze-following at 10 and 11 months of age, said more words when they were 24-months-old (research paper).

– Social robots. With computer scientist collaborators, Meltzoff and Brooks used a human-like robot to further tease apart what social interactions are required for babies to treat a robot like a person and to follow a robot’s gaze, combining infant studies with artificial intelligence (news release and research paper).

In the current longitudinal study, Brooks and Meltzoff measured gaze-following in 10-and-a-half-month old infants, about an even mix of boys and girls. Each baby sat on her parent’s lap across a table from an experimenter.

Over multiple trials, the experimenter waited until she made eye contact with the baby, and then turned her head to look at a toy in the side of the room.

The gaze-following measure served as the behavioral starting point for other social and cognitive behaviors Brooks and Meltzoff assessed when the children were older.

Having measured gaze-following during babyhood, the researchers followed up when the children were toddlers. At 2-and-a-half years of age, the tots were learning language and speaking some words, and Brooks and Meltzoff wanted to see how many words they knew.

They gave the toddlers’ parents a questionnaire of vocabulary words and asked the parents to tick off all the words that their child knew.

In all, the parents had hundreds of words to choose from on the questionnaire. Of those words, the researchers zeroed in on two types:

The parents’ responses showed that at 2-and-a-half-years old, the toddlers in the study knew about 130 (ranging from 35 to 155) words from the non-mental state vocabulary list and about 10 words (ranging from 2 to 15) from the mental-state list.

Looking back at the eye-gaze data, Brooks and Meltzoff observed that the more gaze following the children did as babies, the larger their vocabulary as toddlers. Also, the children with higher gaze-following scores at 10-and-a-half months specifically produced more mental-state words at 2-and-a-half years.

Here’s a riddle that usually stumps toddlers, but that most preschoolers age 5 or 6 can figure out. Show a doll to a 3-year-old child. The doll, Sally, has a penny. She puts it into a box, closes the lid, and goes away leaving the box behind.

Then, a twist. A different doll, Anne, comes along and moves Sally’s penny to a different box and then leaves. Sally comes back and wants her penny.

Ask the child: where will Sally look?

This classic “Sally/Anne” test (see diagram on the right, from the website holah.co.uk) taps into whether children can put themselves in some else’s shoes and understand what other people are thinking, or “theory of mind.” Can they override what they know about the world, and think about something from someone else’s point of view? Do they understand that other people may have different knowledge than themselves?

Three-year-olds typically cannot correctly answer the Sally/Anne riddle. They will tell you that Sally will look in the box where Anne put the penny, not realizing that Sally doesn’t know the penny has been moved. By preschool – age 5 or 6 – most children come up with the right response.

“The task requires the child to distinguish what she knows versus what the child in the story knows. Kids have a hard time keeping this straight,” Brooks said.

She and Meltzoff used the Sally/Anne test and a few other tasks to tap into preschoolers’ theory of mind.

At 4-and-a-half-years of age the children, who had first been to I-LABS as infants for the gaze following experiment, returned to the lab. They sat at a table across from an experimenter, who then spent about 15 minutes playing different games designed to measure the youngsters’ theory of mind.

The preschoolers who were the most successful at the theory of mind activities were those who as toddlers had had the larger vocabularies of mental state terms compared with other children in the study.

“It appears that knowledge of mental state words during toddlerhood sparks awareness of others’ mental states during preschool,” Brooks said. “It’s fascinating to see how these behaviors support each other and form a trajectory across childhood.”

Looking across the three time-points in the study, the pattern of behavior development is this: gaze-following as an infant leads to understanding more mental-state words as a toddler. The more mental-state (“angry,” “pretend,” “think,” etc.) words children know as toddlers in turn led to better performance on theory of mind tasks (understanding someone else’s point of view) by age 4-and-a-half years.

“We need to explore which early social actions are related to children’s later understanding of other people,” Brooks said. “If we’re going to design effective interventions for children who need help, we need to know what specific skills to look for and the mechanisms of development.”