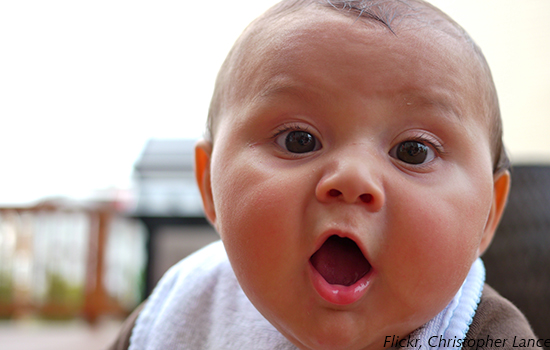 Learn the science behind the linguistic genius of babies, and get tips on how to nurture multilingual development in young children.

How do babies do it? At I-LABS, I study brain mechanisms of language learning in monolingual and bilingual babies. And, I’m raising two children to know multiple languages.

For the Ask I-LABS Outreach series, I’ll explain the brain science behind how babies learn more than one language at the same time. If you’re interested in learning more, check out I-LABS online training module on bilingual language development.

At birth, babies have an unusual gift: their brains can tell the difference between all 800 or so sounds that comprise the world’s languages. That means that they could potentially learn any language that they’re exposed to. For that reason, we often call babies “linguistic geniuses.”

But each language only uses about 40 language sounds, or “phonemes.” By listening to the language (or languages) spoken around them, babies figure out which of the 800 phonemes they hear the most.

Being able to identify native language sounds is one of the first steps in learning a language. By their first birthdays, infants growing up in households where only one language is spoken become more specialized in the subset of sounds in their native language—the one that has been spoken around them.

Because infants’ brains are efficient, they also begin to lose their ability to hear the difference between foreign language sounds.

Can a Baby Brain Specialize in Two Languages?

What about those babies who grow up listening to two languages? Can their brains become specialized to process the sounds of both languages?

One of the latest studies from I-LABS demonstrates a key difference between babies raised in monolingual (English only) versus bilingual (Spanish-English) homes. At 11-months-of age—just before most babies begin to say their first words—the brain recordings revealed that:

– babies from monolingual English households are specialized in English, and are not sensitive to an unfamiliar language (Spanish)

– babies from bilingual families are specialized in both languages, Spanish and English.

This means two things. First, the baby brain specializes in whatever language or languages are present in the environment. Second, bilingual babies were learning English at the same rate as their monolingual peers.

These findings should be a relief to parents raising bilingual children and wondering—as many parents do—whether their baby is learning enough language.

It’s not only language abilities that get a boost from bilingualism. Other forms of cognition benefit as well. Research suggests that the constant switching back and forth between two different languages leads to several life-long cognitive advantages.

I wrote more about this so-called “bilingual advantage” for the news site, The Conversation.

How to Nurture Bilingualism in Babies

As tempting as it may be to plunk infants in front of a media device equipped with second language programming, I-LABS research shows that babies will not learn a second language that way.

Multilingual children, like mine, are part of the growing number of children raised in bilingual and multilingual households in the United States.

My native language is Slovene, my husband’s is Spanish, and we live in mostly English-speaking Seattle with our two young children. We’re raising them with these three languages, and I shared some anecdotes about this in my recent article for The Conversation.

Being able to identify key similarities and differences between monolingual and multilingual learning will help us find ways to help all young children achieve their full language learning potential, and it could also reveal ways to improve language learning in adulthood.

About the Author:
Naja Ferjan Ramírez, Ph.D.
Ferjan Ramírez is a research scientist at I-LABS. She has a Ph.D. in linguistics and cognitive sciences from the University of California, San Diego. Ferjan Ramírez uses brain and behavioral measures to examine monolingual and multilingual language acquisition during early childhood. She helped produce I-LABS online training modules on language development.

See Previous Posts
How Can I Make My Child Exceptionally Smart?
What’s the Big Deal About Screen Media?
How Similar is Theater to I-LABS Research?